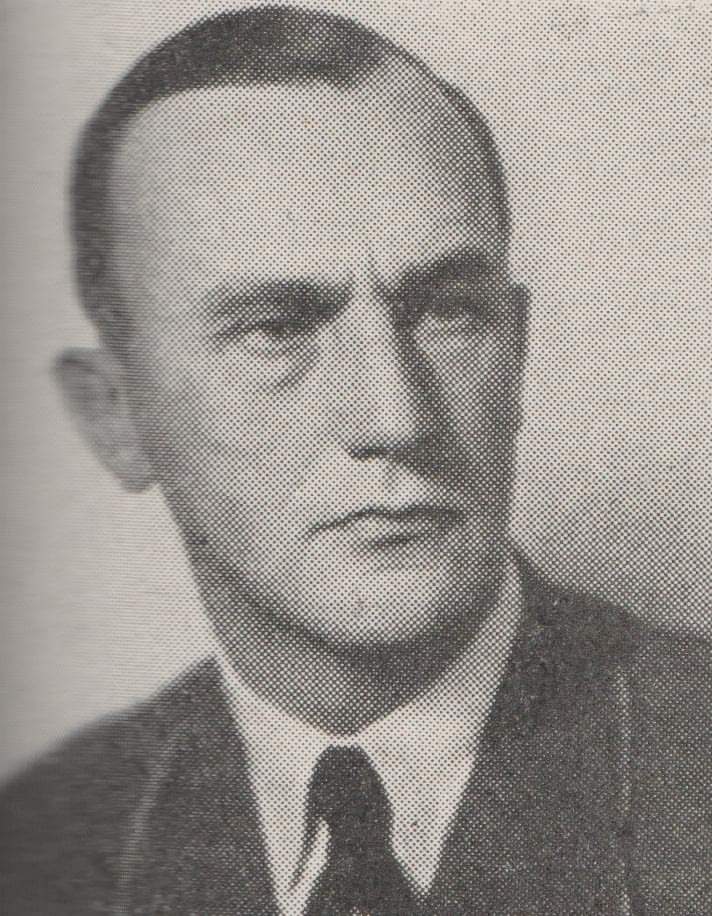 It's a fact that should be more generally known but Donald Trump is kin to an SS officer, an SS-Oberfuhrer (between colonel and major general) and a director of the Reichsbank. One would think this would have been newsworthy when he was running for president but it wasn't. Even the Bush family's business connections to the Third Reich were mentioned in the Washington Post even if no one noticed or cared. This bit of family info about Trump is kind of germane. It seems the American media missed this story and more people, especially Americans, should be aware of it.

Arnold Trumpf was also an expert on community banks and industrial agriculture. More importantly, he was SS and lived a long life after the defeat of the Third Reich.

The president of the United States is related to an SS officer and he's targeting immigrants and antifascists as well as dabbling in eugenics and plaguemongering. It matters, especially since at least one of his cousins used to greet him with a "Heil Hitler" on a regular basis. 1

"Arnold Wilhelm August Trumpf was a German graduate farmer, reserve officer of the German Army and the Freikorps (suppression of the communist coup in Halle 1919), most recently Lieutenant of the Reserve , President of the Reich Association of German Agricultural Cooperatives - Raiffeisen - e. V. and Reichsabteilungleiter in the main department of III. Reichsnahrats des Reichsnährstandses (appointed by Reichsbauführer Walther Darré ) and officer of the Allgemeine SS , most recently SS-Oberführer in the Second World War."

This information and more can be found on the German Metapedia entry for Arnold Wilhelm August Trumpf.

Trumpf is one of the Trumps of Kallstadt, Germany which also includes Donald Trump . His father was the district court secretary Wilhelm Trumpf. On June 9, 1923, the Corporal Lieutenant of the Reserve Arnold Trumpf married his fiancé Elisabeth Hanke (born June 1, 1902) and from the marriage was born 1942 daughter Heike.

"...Donald Trump appears to take aspects of his German background seriously. John Walter works for the Trump Organization, and when he visits Donald in his office, Ivana told a friend, he clicks his heels and says, “Heil Hitler,” possibly as a family joke.

Last April, perhaps in a surge of Czech nationalism, Ivana Trump told her lawyer Michael Kennedy that from time to time her husband reads a book of Hitler’s collected speeches, My New Order, which he keeps in a cabinet by his bed. Kennedy now guards a copy of My New Order in a closet at his office, as if it were a grenade. Hitler’s speeches, from his earliest days up through the Phony War of 1939, reveal his extraordinary ability as a master propagandist.

“Did your cousin John give you the Hitler speeches?” I asked Trump.

Trump hesitated. “Who told you that?”

“Actually, it was my friend Marty Davis from Paramount who gave me a copy of Mein Kampf, and he’s a Jew.”

(I did give him a book about Hitler,” Marty Davis said. “But it was My New Order, Hitler’s speeches, not Mein Kampf. I thought he would find it interesting. I am his friend, but I’m not Jewish.”)

Later, Trump returned to this subject. “If I had these speeches, and I am not saying that I do, I would never read them.”

Is Ivana trying to convince her friends and lawyer that Trump is a crypto-Nazi? Trump is no reader or history buff. Perhaps his possession of Hitler’s speeches merely indicates an interest in Hitler’s genius at propaganda.

The Führer often described his defeats at Stalingrad and in North Africa as great victories. Trump continues to endow his diminishing world with significance as well. “There’s nobody that has the cash flow that I have,” he told The Wall Street Journal long after he knew better. “I want to be king of cash.”